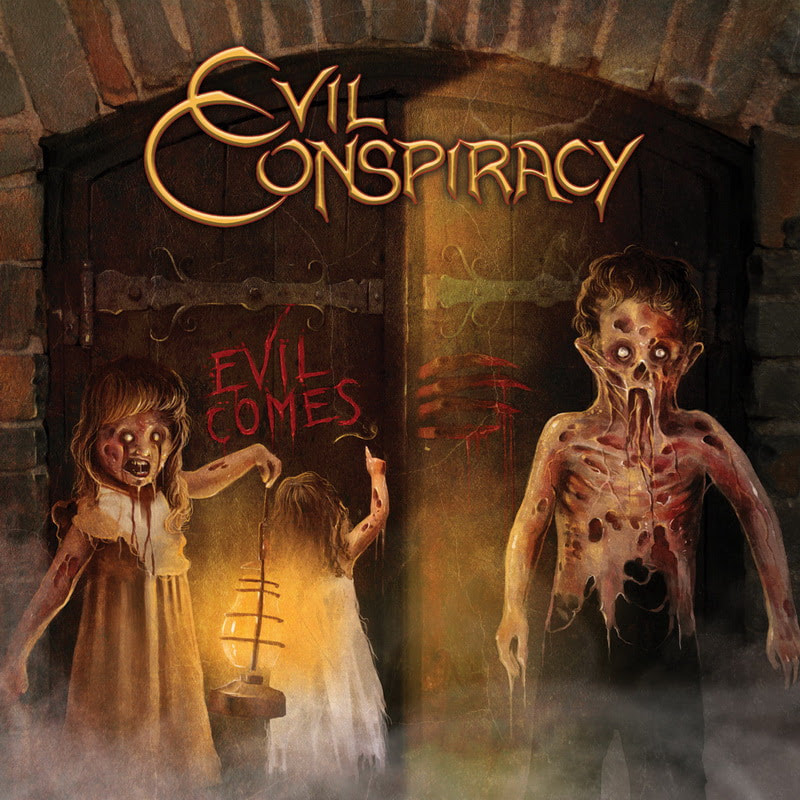 ...And evil came in February 2019... Then was a premiere of the album by Sliptrick Records.
Evil Conspiracy is a heavy metal band from Sweden with five guys forming the line-up.

Evil Comes was recorded on Swedish soil, in several recording studios there. Drums sound a bit plastic as for me, but overall production is very good and they bring a fresh blow of heavy metal music.

I am glad that that opening track is Dogs Ov War because it`s my favourite. You know, the song is dynamic, has some catchy music going on. They have melodic choirs and it really feels good when they shout out Dogs Ov War during the song. Very solid tunes!
Of course, they have other fast songs like Demons On Speed and Pagan Curse which remind me German band Sinner and their album The Nature Of Evil. I know, because it`s also one of my favorite album out there.
The other track that is mainly driven by sharp guitars and vocals is Violent Intent.
If you like more speed metal guitars a`la Halloween, song Resurrection is the one you need.

The album is not always fast, not even fast that often!

Slower song is Endless Darkness with magnificently heavy riffs which sometimes brings that ancient sounding guitars from Maiden`s Powerslave album.
Little more guitar chords and groove you will find in sixth track.  It`s pretty cool, the way vocalist sings and express  a word Golgotha in the song.
Melodic rhythms, guitar shredding, mixed with heavier moments are in track When Evil Comes To Town. The band has softened vocal choirs here so it sounds more rock-pop`ish in a way. I like it. Similarly, they do it in fifth song which was already mentioned by me.
Down To The Lord is more atmospheric track. They used some keyboards and for over 3 minutes they play it slow but very nice, with fire (which those more dynamic songs have too). You can hear some melo-cinematic vocals here. Last minutes of this album are faster again and is should be like that. It`s hard to imagine good heavy metal album without faster pace for me.

Okey, folks. Evil Conspiracy has influences, you can catch it in their songs - nobody is perfect. But, they have their own music ideas for music and I like those offerings and how the band captured it all in their avenging songs and heavy metal sound.
​Tracklist: