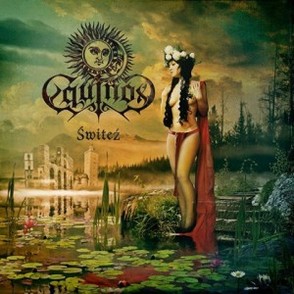 I got my attention to this band just after I checked out their music, also found that the band`s activity is in Moscow, Russia. I guess there are so many underrated bands in that country and I can`t understand why their music industry seems to be so much isolated. As far I remember I do not know any bands from Russia either. Let`s move on to change it a little bit.

It has had to be quite big decision to title the album in Polish. In fact there is a closing song (Switez by author Adam Mickiewicz) called like album, sung entirely in Polish and if this band is lucky they could get lots of support from my country if you spread the word. 10 other songs are in native Russian and I even have understood some of it. This band is mixed with leading female vocals that are tracked very well on this album. Vocals of Alla Ravna are very melodic like telling the stories in fairy tale and she is going for her best in every song. No doubt that album is produced very precisely with lots of melodies, speed metal guitars, flute, violin and other instruments that make you feel like you are the part of story and you like to be there. It looks like this album is quite important production as they invite almost dozen musicians to reach the sound of album and it worked out. The album is about hour long and I do not have sense of time as it is likely not if you listen to the music you actually like.

﻿I`ve asked Cyril Nikeyev. Bass, keys, back-vocalist of Equinox to give you short overview on the band in article below.

We named our album in Polish because  I`m of Polish origin and pan Adam is one of my far ancestors. My family name was Nieciewski before my grand dad had moved to Russia. Telling the stories in lyrics it's a kind of cultural opposition against half- Nazi half patriotic madness of Russians. The stories about ancient Poland and Lithuania are the stories about democratic alternatives in terms of Moscow autocracy and tyranny.

Equinox is a serious re-incarnation of Beer Bear band. We played many concerts together with Arkona. But at the moment Equinox is a new band for Russian metal scene. To my response that album sounds fantastic with all those instruments Cyril Nikeyev continues; The sound is our experience of Beer Bear band. If you listen to "beyond the invisible line" album, you'll listen to even more interesting instruments. We just prefer to use so many instruments that we want. And of course it's because of golden hands of our studio sound-man Sergey Lazar. Arkona 's guitarist.﻿