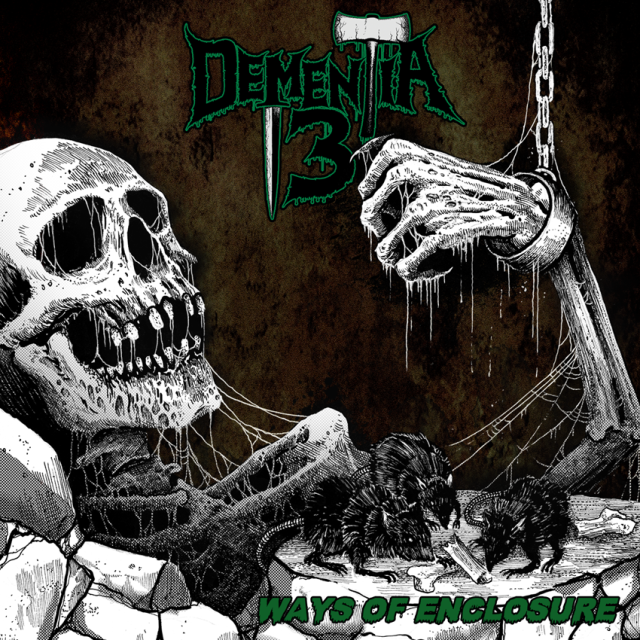 That`s a shame that for almost 3 decades I am into metal, I could swear that I went through maybe 5 bands from Portugal and remember just 2 of them. Another one that breaks the silence is old school death metal band that is kind of cinematic tribute to world famous horror flicks( some of them at least) that everybody into movies, should heard about. If not, Dementia 13 and this album point for you the most shocking and gruesome movies in history also giving you traditional death metal as main factor boosting those stories.

Those  9 songs  are statement that nowadays you are able to record an album that could be placed in certain time around, when death metal was in era of development and people asked themselves if that could go any brutal yet. For band like Dementia 13 speculations are pointless as they give you straight forward, rotting death metal with classic growl vocals, basic but mature guitars alongside non-blast drumbeats. Every song on album has unique character and they put out here some smartest and organic tracks you would  like to hear without doubt.

All those cuts off from the movies are integral part of what the band do and I really enjoy it as I am a horror fan myself and it is quite natural for me having fun throughout the whole album imagining those gory scenes you might watch around on your telly.

I can`t see why not to mention some other old school bands like Benediction, Cancer, Impetigo, early Death, Massacre. All those classic death metal bands are generously connected via vision of music that Dementia 13 continues as their successors. Those Portuguese give you all what you would expect from the genre and bringing you back memories from days when you would torture your neighbour by another death metal album in your collection as it was most triumphant sick joke in late 80`s and early 90`s as I can remember.

Ways of enclosure is important album of 2015 and if music had taste I would say this one is like soil from the cemetery ground.

​Scroll down and keep reading.
In my review I did not specified  anything about movies and lyrics that are part of this album. Let`s see what Alvaro.F (rhythm guitar) had in mind during song writing process and what are his top horror films that slay him in time of watching them. \m/

​1. Beyond the Grave
This song is inspired on part 3 of the "Return of the Living Dead" movie saga, which was directed by Brian Yuzna ("Society", "The Dentist", "Bride of Re-Animator"). One thing we always try to do is to combine the feeling and atmosphere of the movie with the song. So, this was an easy one for me. Part 3 is my favourite movie of the saga and, in this case, the music kind of follows the crescendo of the tension in the story. It features some slow and morbid riffs, mid-paced ones and others that are simply frenzy, fast and aggressive. Just like the movie itself.

2. Orgy of Bloodshed
One of the oldest songs in the track list. It's one that we've been playing in some shows while promoting our debut EP CD. It was written during 2013 in-between gigs and rehearsals. It's inspired on Lamberto Bava's "Demons" from 1985. Lamberto is Mario Bava's son and this one is also produced by Dario Argento, one of my favourite genius in the Horror movie scene. This is a faster tune, where basically tells what happens when several people, recently turned into flesh eating demons (due to an ancient curse), start to chase everyone alive while they are all trapped in a cinema theatre. It's a bloody one!!

3. Room 36
Like Dario Argento, Lucio Fulci is also one of my all time favourite directors and "The Beyond" from 1981, is a brilliant example of what he did, the style he created and the legacy he left us. He's still a reference nowadays and most of his movies are perfect cult Horror classics. Once again, a more Death [band] approach on this one, morbid, dark and melocic evil riffs, perfect for a movie like "The Beyond".

4. They Never Found His Body
This song has more of a thrashy feeling, like Demolition Hammer mixed with Necrophagia Doom/rotting riffing and a bit of Benediction too. So, for a song like this, I chose a more American Horror Slasher (yet dark) mood, in the form of "The Burning" from 1981. Teenagers being chased and killed is the perfect feeling for thrashier riffs and a classic murder scene where some teenagers are slaughtered on a canoe is perfect for the more Doom/slow riff style in the middle of the song. KILL 'EM ALL!!! Oh TRIVIA time, famous George Constanza (Jason Alexander) from Seinfeld TV series, has a role in this flick. Just check it out. 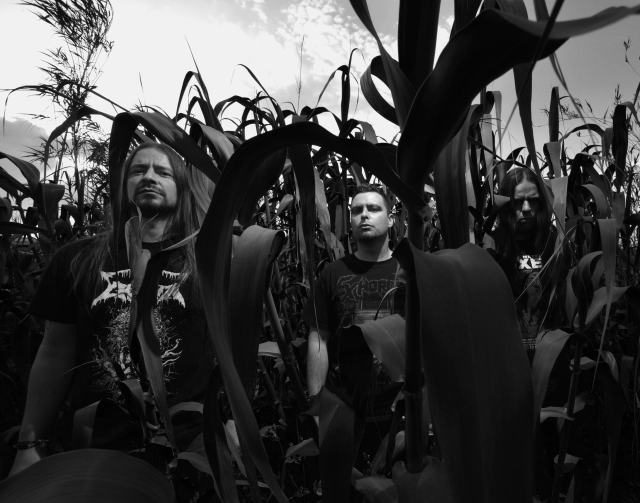 ​5. Only Whores Die Young
This title is inspired on another American Slasher movie called "The Slumber Party Massacre" (1982). Like our EP song and video "There Are Those Who Kill Violently" (from the movie "Driller Killer"), this one also features a killer with a drill. And his favourite victims are semi naked female teenagers with great boobs, holding a slumber party at one of their friend's house. So, that's the plot and it fits great in this song, I believe. The title was made up from the Iron Maiden song "Only the good Die Young". I just gave it a little twist, kind of humorous, in order to suit better the movie theme.

6. Halloween
A cover song of the well known main theme from the 1978 classic "Halloween", originally written and recorded by the one and only John Carpenter. Since it has a very catchy and famous evil/scary melody and sound, I thought it would be perfect for a Death Metal guitar version. We use to play it as an introduction on live shows.

7. Conceived in Violence
A Obituary "chaos in the pit" vibe, this is the fastest (and shortest) song in the album. Inspired on a Horror/Sci-fi movie from the 80's called "Inseminoid" (AKA "Horror Planet") with a kind of poor plot with only a few good ideas to use to write lyrics for a full song but, nevertheless, a great claustrophobic Horror Thriller for fans of "The Thing", "Alien" or even "Invasion of the Body Snatchers" (1978 version). So, this had to be on a fast and short song and "Conceived in Violence" fitted perfectly!

8. Nothing in the Dark
This song came up following the initial idea of the main acoustic riff. I wrote that part so this could be an instrumental song to be played before the last track "Dawn of Chaos". This way, both would be a great match for a sort of epic ending of the album. Then I came up with the idea for this melody I had created to be somehow combined with the atmosphere of a 1962 "Twilight Zone" TV series episode I had recently watched again a few years ago. It tells the story of an old woman, feeling that Death will come, sooner or later, knocking at her door in the form of a human being. So, during a storm, a man knocks at her door, asking for shelter and she thinks it may be Death itself trying to trick her. It's my favourite episode of the series ever. It's so well written, so melancholic and dark and scary in a certain way. To add more of that feeling, I started experimenting some keyboards to be added to the acoustic guitar and, along with Marco (our guitarist), we decided it would sound great to have some John Carpenter creepy melody inspired and that was it!

9. Dawn of Chaos
It's the longest and oldest song in the CD. It was written back in 2011 but it wasn't included on our debut EP “Tales for the Carnivorous” EP, since we had to choose only 4 songs for that release. It's a mid-paced, heavy song, perfect for headbanging, with a very Bolt Thrower feeling. It was inspired on "Nightmare City" (1980), directed by the Italian  Umberto Lenzi. A song with an epic, chaotic, post-apocalyptic feeling perfect for the zombie massacre outbreak portrayed in this classic. It's blood poring all the time! DEATH METAL!!! \m/ 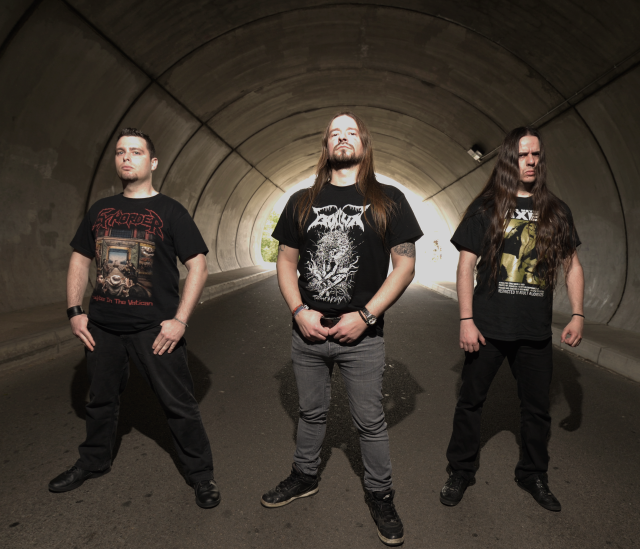