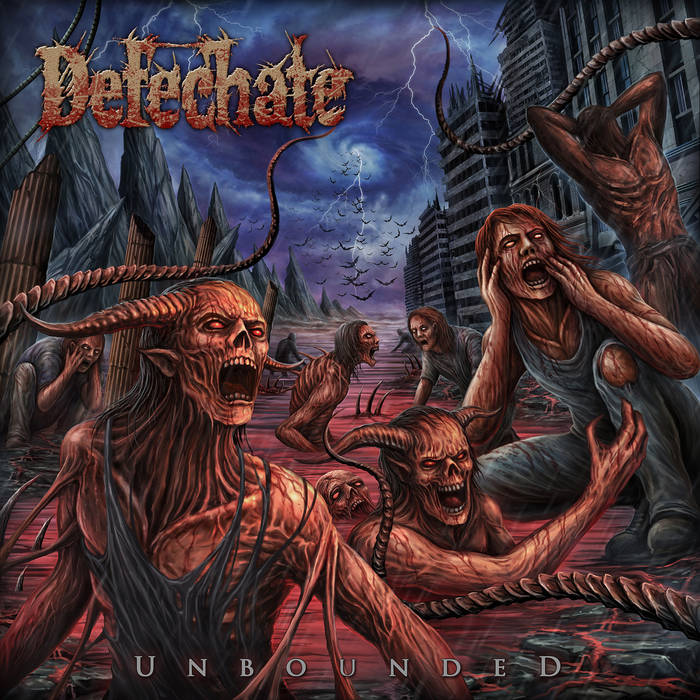 Defechate (Ita) is Luke Scurb on guitars, drums, effects and Giuseppe Tatangelo on vocals and bass.  Also, the album features many guests musicians.

There are many ways to describe the music of Defechate. First of all, it is an album with elements of death metal, grind core, technical death, a bit slammy death metal and they do play it all throughout the record frequently. No surprise are guttural growls & screams from their frontman, which are well performed in manner of death metal. What else is there in the music are breaking guitar rhythms, lot of them, it sometimes sound melodic, other times a bit catchy, but usually guitars always sound brutal. Defechate is not a strict,  extreme death metal band, because Unbounded is a bit different album than that. I appreciate even tiny music diversity that they brought to their songs,  influences of death metal and its sub-genres plus grind core are good enough to get my interest toward the album and the music of the band.
Bass in tracks is well exposed, active, and not once, the bass-player emphasizes his play in rhythm section, which is an element that counts in the band and thanks to which the music gains more variety. A lot of rhythmic arrangements are disturbed by weirder guitar play that they deliver from time to time in song structures. So, it is simplicity mixed with some technicality that this album has. Drummer laid plenty of kick drums in tracks , which gave songs more feel of death metal. What drive this album foremost are super rhythmic, breaking guitar patterns/ideas - death and grind core songs that I think are quite satisfactory the way the band plays them.
Album has decent studio production, not overwhelmed quality of it, but good, acceptable sound. To be frank, I am not sure, which bands I could compare Defechate music to. I guess it`s good, because many times, music of the band positively surprised me.
​Tracklist: