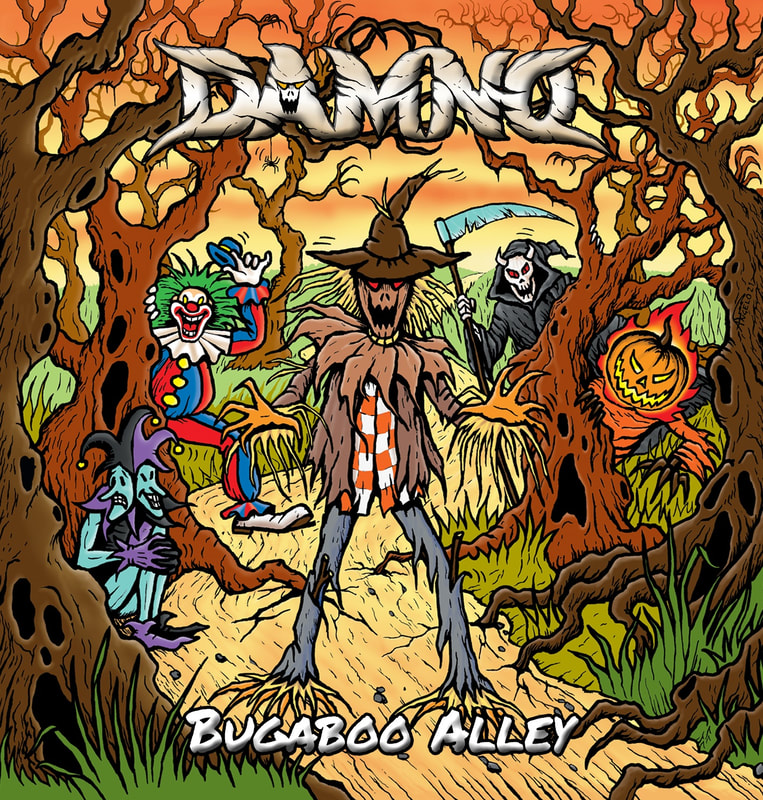 Once in a while, front cover, the art, is what attracts me to listen to the music from a new band. I associate Bugaboo Alley picture with excitement, Halloween times, but mostly, this piece of fine art makes me feel like a kid again.

Damno from Italy is not really a band, for now, it`s one-man project of Danilo Teti who did vocals and played all instruments on this EP. General direction of those 4 tracks is progressive metal (ending 1 or two minutes in song Forgotten in the Oven “tells” you so), but there is so much more to it than just that. Songs are very bright and diverse, melodic, aggressive and technical - wherever the core of the songs needs it.
It`s also humorous project - how I can think otherwise when hearing vocal mimics of Donald Duck (Crazy Doll Piece by Piece) from famous cartoon or whistle blowing (like in football) that were tracked down funny ways into music. Danilo uses multi-vocal variations in songs-from melodic singing to growls and screams, funny chumming, ritualistic chants, techno type vocals (heard the same effect, somewhere in Gojira song), to nice choruses (Bugaboo Alley). Still, beside those humorous moments in music, Damno also plays pretty serious progressive metal that sometimes takes shapes of metal core (Forgotten in the Oven), funky rock with  prog-jazz influences (bass in Spanking Core), grind core (Crazy Doll Piece by Piece) or groove metal that you can hear in every song. Groovy guitar harmonies sound pretty heavy, same as drumming, which is reach of various arrangements. Damno often takes progressive metal sideways, to just find a room for other musical expressions – track Spanking-Core is such totally crazy, super original way that showcases it, but eventually Danilo always comes back to his progressive, unexpected song writing. Clearly, for me, he has found, sort of fluency to his songs while experimenting with vocals, drums and music in general. Damno does not stick to any musical formula, this project fully breaths in and out its musical creativity and voids clichés if possible...And summarizing, it`s seriously funny metal record.
​Tracklist: