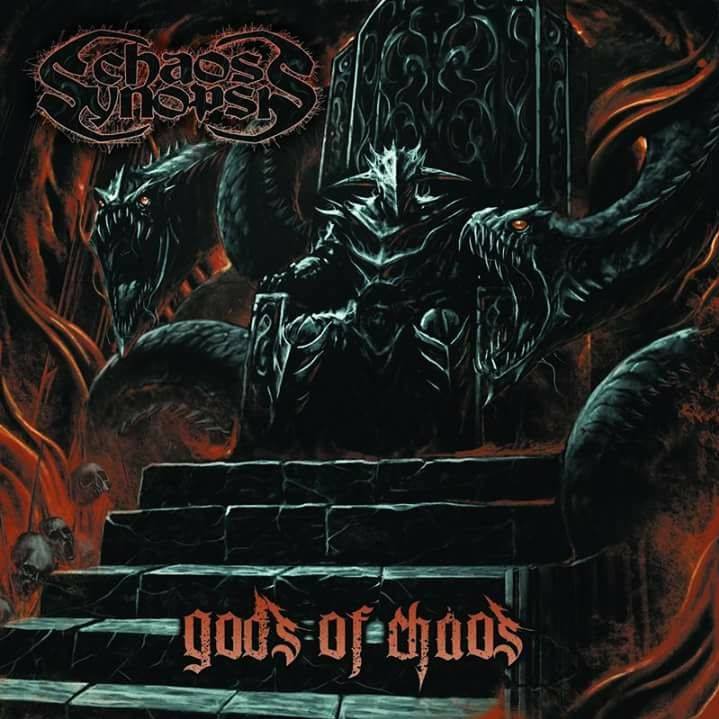 The song titles do not immediately tell you what the album is all about, but when you get into the lyrics, the names of mythical creatures, religious gods, will be revealed along with descriptions about them. For example, you can learn something about Leviathan, Seth, Typhoon, Ahrimah and Black God - which in Slavic language is a god called Czarnobóg...
OK, the album title is Gods Of Chaos which seems accurate. Graphics of these creatures/gods in CD version show off their visual shape which is much better to look at it than read about it. As a curiosity, the word chaos occurs in the text of songs so many times that it is difficult to count.

Chaos Synopsis is Brazilian death metal band that has already played European tours. Maybe that`s why they have learned how to combine South American and European sound on this album. The production of the album is quite good, and the songs are not as neglected as in other bands from South America. I think they have still a lot to do if they want to reach the level of Krisiun, Behemoth, Nile which I think are the bands that influenced Chaos Synopsis in some mysterious ways.

Vocals and drumming accents sound wisely on this album but it almost reminds me of era before Satanist by Behemoth which is fine to recall.
Better songs are Serpent In Flames, a track that builds-up dark climax nicely, they do not play it fast at all but very profoundly.
Storm Of Gods, Badlands Terror and Raising Hell are something for enthusiasts of death/thrash metal songs which are also aggressive and fast.
Some other tracks go often sideways from typical death metal that is sometimes mixed with melodic metal. The album is rough and death metal at first but it is not what you always hear in their music; think about more straight thrash metal because they play such songs (The Beast That Sieges Heaves) as well.
S/T song with those opening riffs sounds somehow like Vader (Dark Ages) but I think they just like to slow the tempo occasionally down and amuse themselves,  as they do in this track. It is not easy to play slowly and write a good song but Chaos Synopsis is good at it.
Special track is Black God that has both English and Polish vocals because the song refers to Slavic deity which has been sang by guests and friends of theirs from Poland.
The last track is Cross Over Brazil which is a cover of Polish crossover thrash band – Terrordome. Originally the song is entitled Cross Over Cracow. If, for example you were a cover band from Italy, the song would have a title Cross Over Italy. It would be fun if other bands could record their version of this song in the future and why not...