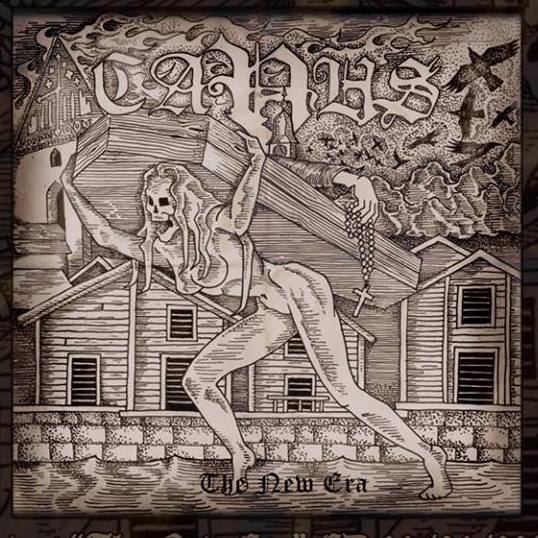 Back in 2010 Cavus has released Fester And Putrefy album for Listenable records so the band`s name must not be completely new for many people out there.  It took big time to complete The New Era by the band but this 2018 album is finally out under the flags of Satanath and Final Gate Recs.

Cavus hails from Finland and like so many albums from the frozen lands of Scandinavia The New Era represents chaotic black metal, dictated by anxiety. Songs are bit trivial, almost primitive and with connection to loud drumming and down tuned production of other instruments the music gives you a vibe of 90`s dirty and evil black metal to just mention Impaled Nazarene, Horna and such bands. Although the raw sound and the music persistence of the band to traditional black metal production is obvious, they have song like Morphine in tone of Hellhammer and old Bathory which is great to hear. Occasionally, Cavus can give you little black`n`roll` vibe at some points of this record which is just enough to break chaos of music and enjoy the songs a bit more. The band express gloominess and aggression in both fast&medium paced songs which can make your days turn into nights if you prefer black metal that is full of shadows from the past times.

The vocals represent depravity, tension and agitation the way they sound in this album with some of that grimmy shrieks known from Scandinavian countries and beyond. Several times you can hear an almost wolf howl of the singer (just like in the beginning and at the end of track 3), which sounds incredible. I am a bit unsatisfied that Cavus has not used all the potential in this regard and I mean why not do it in every song?...

The New Era is imperfectly good album which makes me hellishly comfortable few times, because Cavus brings a sense and nature of harsh black metal to its primal form. It`s because of  roughness of sound and perversion of music obscurity this album wins its spirit of damnation.

I do not know if the album will pleases many people, but you will not know it until you listen to their music. Personally, I don't think it`is the record I dislike.