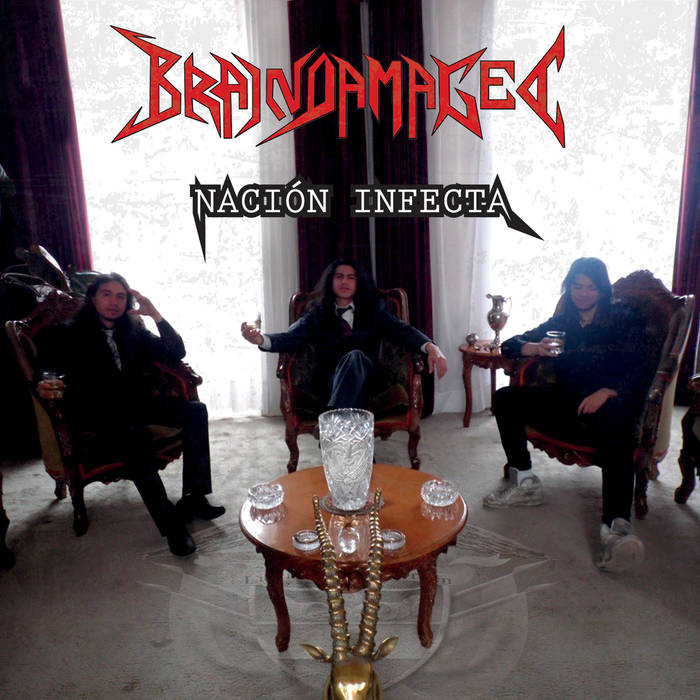 I do not know if the band is still around because their facebook page seems shut down and the album was released in 2016, so since that time quite a lot could had happen.

Brain Damaged comes from South America, more precisely from Colombia. The band is a trio and their album represents old school thrash metal with punk and hard core influences. So, the music is quite a crossover of few genres then. The free spirit of their music and nice production of the album are positive elements of the album. Sloppy approach to the construction of songs reveals their lack of experience to create more for quality of music which, on the other hand is significant for bands in Europe. Some fragments in music sound completely naked, like if they just met in the band and start playing whatever came to mind with just little impact in planning anything further for the sake of better music.  This aspect is a common approach for many South American bands.  Of course, sometimes such spontaneous steps could bring desired effects, sometimes just not. But wait a minute, it`s not that bad with this album. I skip writing about all boring parts and just give you some light on few better tracks that in my opinion heat up some atmosphere around and have a nice South American vibe to it. In case if you wonder, the overall music feeling and sound in this album are just like you would expect it from the band from that region of the world which is like; let`s “all hell breaks loose” some.

The first song I want to point out has number 2 on tracklist. In specific criteria of this album I would say this track is a fine aggressor with fast-slow moments. Pretty good track though, in the vein of Attomica from Brazil.

Song Manipulacion is a furious thrash/hard core track with raging vocals and few heavier guitars. As most of the songs here, this one sounds very old school which reminds me of other Brazilian band Uganga.

Now I mention song with number six only because it has some Slayer`ish vibe to it - even some similar guitar solos from Slayer`s first two albums. The choirs and wrathful vocals they tracked down here spread some terrors off the music.

I mind you that vocals in the album are in Portuguese (except song 4) and singer impose his lyrics on you with much more hard core/punk manner than singers of typical thrash metal bands would do.

It`s good album but without giving me a hurray optimism from what I heard here . I think Nacion Infecta almost always sounds a bit exotic for European people and most of them would even like it. However, I bet that there are a lot of similar bands in South America that sound alike Brain Damaged and they harden to find their own style.