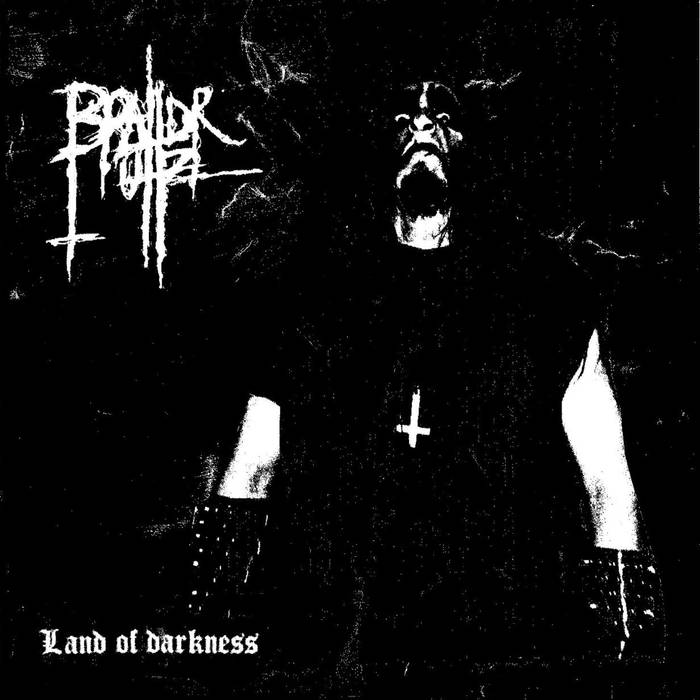 Oh, to spell the name of this band, it's probably a nightmare to try for everyone, I think.  If I wanted to talk to a friend about this album there is no way I could speak out the name of the band to this person. I think it`s kind of a burden the bands put on themselves if people can`s talk about certain bands if they do not remember their names or have hard times to articulate certain words...

If 90`s black metal sound is something you would die for and your mind rejects anything else that sounds differently, then here you go. The Land Of Darkness has only songs that are filled with hatred, darkness and misanthropy. This duo seems to write their music in total absence of light so the blasphemy and night can prevail.

High pitched shrieks of the vocalists is nothing new but it`s what makes your blakk metal heart pounding faster if you know what I mean.  The sound of guitars is cold as ice but production is nothing but ugly, raw and harsh. I do not know in which conditions they recorded the album but it has some obscure garage sound where they probably killed some pigs, and their blood was still in their hands and on the walls while they were recording the music \m/.
They divided drumming parts between two members who strike you with blast beats but also with a lot of primitive drumming like bands Dark Throne, Vlad Tepes do for example. If you like so, then you should probably take those rushed and slower drum parts as easy as Brahdr`Uhz go with them.
This album is everything but black metal and trivial. They do not even sound like anything that I heard from Switzerland, except band Pure. Land Of Darkness album is forged on the sound where black metal first exploded which is in Norway, Scandinavia, which later on was followed by other bands in Europe and beyond. It's a long, carelessly written and uncompromising album in which gloominess is never too much.

Brahdr`Uhz reminds me of the old times of black metal, which ideas are circulating to this day. Out of respect for the genre, Land Of Darkness is type of underground album that should always be produced for fans and heard by them so the spirit of pure black metal can never be forgotten. You can either luv this album or hate it for its cliche but it`s really up to you how you gonna respond to the music of this band.