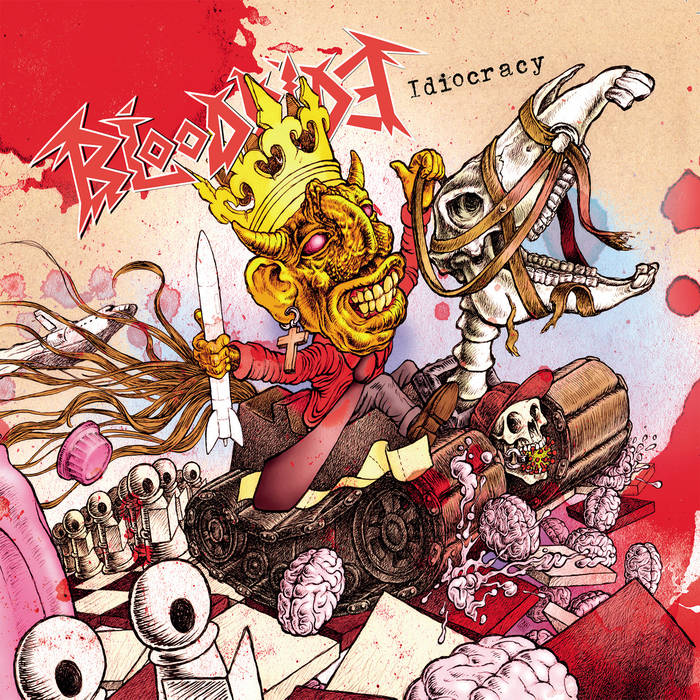 Bloodride turns their Finnish blood into thrash riffs on their newest, fourth album. They mix old with new, however music builds its skeleton more, on the rust of older influences of bands like Accuser, Lost Society, Anthrax, among others. The album is full of brutal riffage, vocals leaning toward death metal, but technically sound more thrash (vocal shouts, melodic choruses). Many songs have also a good amount of melodies injected, however not too much, because the album centers on violent riffs and intensity. Thrash does not seems to be any good without guitar solos, and Bloodride does not stay behind in the subject, they spice the music with a few merciless guitar solos as they play. It`s also the album of many agitative and brutal death metal riffs, which they measure with some cutting flesh thrash metal shreds a`la Slayer (second song) or Testament, so the outcome is kind of crossover of thrash (music) and death metal (guttural vocals).  Bloodrine play mostly fast and brutal, but they do not fall into routine, there is some heaviness to their guitar work, while some harmonies just carry melodies in, which is why their musical atrocities are easier to proceed in my head. Songs are angry, energetic, pace and music ideas change when it needs, but speed and aggression is more what come out from this album. Band members play in many other bands, and you can hear that it`s skilled and technically well composed album that is a solid piece of thrash metal, although is not surprising at all, along the way.
To my favorite tracks belong four first tracks, also Cast Out From Idiocracy and Zombie Walk. These songs should heat your brains up, while you listen to the music of those Finish aggressors.
​Tracklist: