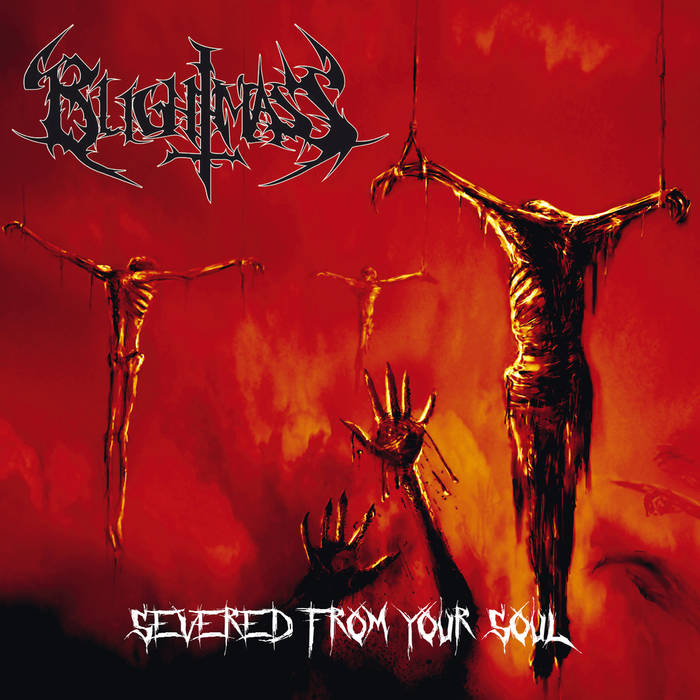 ​Here is a French band playing death metal – nothing of modern take, only old school sounding album that has production bits and pieces of Scream Bloody Gore by Death, first two Autopsy albums and they going across some Necrophagia music ideas as well (Misery Of Martyrdom). I get this sensation of sound decomposition from their music the way the band tuned instruments to record this album.
The bass sound is very rotting - low tuned, the drums are loud, but the studio production of Severed From Your Soul is only similar and not as good as in the bands I mentioned above.

BlightMass combines heavy riffs with minor melodies. They do not exploring melodic territories of music as  much as I would want it - in my opinion, they would sound better with it.  I think they are in need to preserve horrific tone of their music on the first place. It goes with focused growls that sound pretty terrifying and just very good. They also have some gory edge to their music so it`s certainly brutal album but not like they would tear you to pieces by constantly playing fast because they are not doing it often. In songs 1 to 10, the band's strongest side is simply heavy-sounding death metal, but this only works for slow and medium paced songs that have more death metal rhythms going on - here I like this album the most. 10 and 11 on a list are faster tracks and here, the band is losing a music clarity sometimes, in cacophony and chaos of sound due to specific studio production which not quite allow fast moments on this particular album. One of this track features Ralph Santolla who sadly passed away last year and left off his music legacy in bands like Deicide, Obituary.... My point is that playing fast on the album and having little more complex songs (11) is not overall a good idea because music is starting to sound little too messy.
I do not know if it`s whether good or bad for this band but Carcass cover song - Black Star is the best track of the album. It has death&roll feeling that BlightMass tries to achieve in their original songs (My Embrance, Inverted Ascension ), they are not just quite there yet - brutality of the album prevails over rock& roll and melodic vibes which rather stay in a very deep coma in their songs...
Do not get it wrong, Severed From Your Soul is not a bad album, it only could have been produced better so music could sound better too.
​1. Pale Child (Intro)
2. My Embrace
3. Destruction Inevitable
4. Misery for Martyrdom
5. Inverted Ascension
6. Severed From Your Soul
7. When He Wakes
8. Grave Hatred
9. Scorched Atrocity
10. They Will Listen to the Dead (ft. Ralph Santolla)
11. To Have Bled the Price
12. Visions of Desolation (Outro)
13. Black Star [Carcass Cover]
Review by Slawek Migacz
​Added: 13.11.2019
BlightMass
​Homepage