Atonement
Where The Light Is Devouring By Darkness
Mara Production 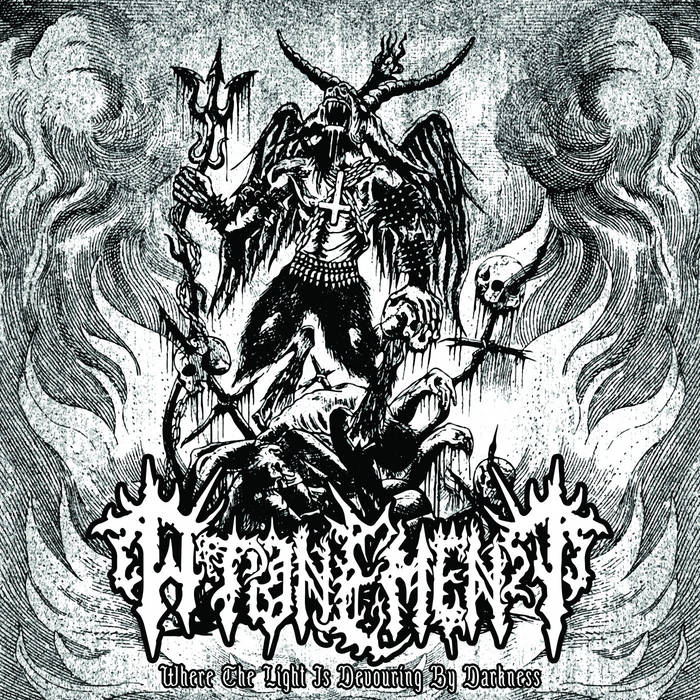 The band is a hell born, disgusting entity of  death metal scene. They do not pay much importance to the shape and performance of their music, their brutality and death metal foulness can only pollute your mind, not because they are like that, it`s more because they care-less and they are lacking of original music ideas for their songs, so you must be open for what was already done in death metal history. Paradox is that they sort of sound evil, especially growing vocals are alike hearing a creature from the underworld. Knowing mankind, many of you may like their uncompromising music and general dirt (vocals and album production), but also many of you may just hate their music, after maybe minutes of listening to it. How Atonement's music affects me, makes me completely indifferent to their  putrid songs from depths of chaos. Guitars have crispy sound in the record as it was heard on hundreds other albums like this one before, but the record has quite many crushing rhythms (yes, it is old school death metal from the stinky ass of Satan). There are much heavy-based compositions and some of that simple, oldy death metal guitar shreds that give me some creeps, like I was living through it 30 years ago - not a bad feeling at all. Album production is shit but eventually you may like this shit because in the end, when I used to it, it became digestible. Positives of the album are vocals, causing a sense of horror and sort of fright. The other thing is sometimes a ghastly guitar work that make me realize that there is no feeling nor sign of life in this album and all turns dead as they play.
Hey, the album has some good tracks: Mor Gash (heavy song in the vein of Swedish death metal),  Don't Follow The Lights  is having its slower and faster times, and song titled Ushur Daihir has its blazing guitar moments. Bells Of Doom (nice bass play in the track) is another example of how often this album has tendency of being played on heavy notes; song The Choir Of The Undead is just slow-hammering your head while Chalice Of Misterious Whispers is so crushing at times, yet, has  some pseudo-melodic riffs that are rarity of the album.
Where The Light Is Devouring By Darkness does not have much diversity, just in your face, death metal tracks. If you like fast songs then you rather won`t find it very often on this putrid death metal record, but who cares, bands like Atonement are needed when they play slower, and their music can still remains brutal.
​Tracklist: