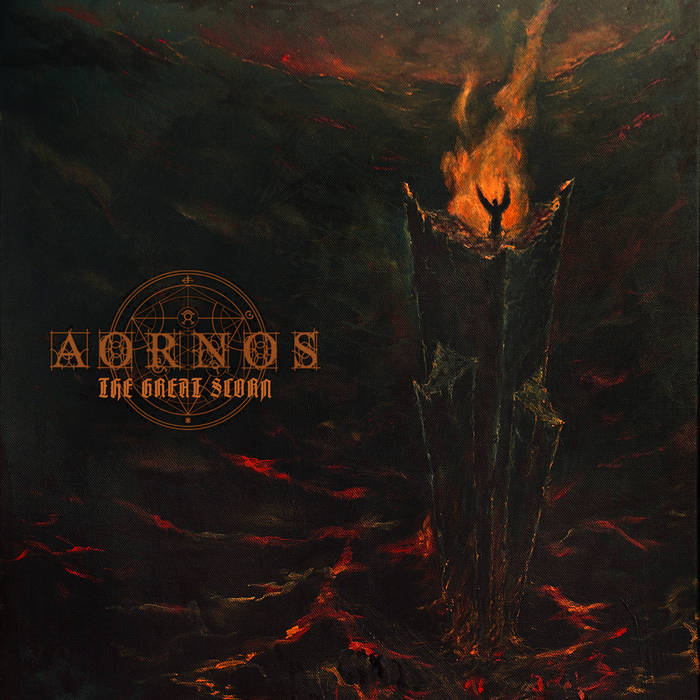 Aornos was formed on the Hungarian soil, in 2014. Since then, this one man band has released 2 albums; The Orior (2015), Mors Sola (2016). Aornos is occupied by Algras who handles all music and instruments on his third album called The Great Scorn, which consists of 9 songs.

Once I played the record, the first thing that becomes quite significant is influence of Emperor on music of this band. Do not take it as argument to dislike this record. It`s quite in contrary...

The guitar riffs are both simple – like in traditional 90`s black metal,  and even little technically advanced - as it`s in last album of Elegis. Symphonic keyboard passages that Aornos throws on you like lightning from the sky are the spectre of cosmic and very passionate black metal but guitar approach is just as good. This album can often drive you beyond typical thinking about black metal as it is normally perceived.  I do not say the music here sounds very original or brings new elements to the genre, because it is not, but songs ideas and the sound fully apply to my imagination. And furthermore, the album has kind of fierce - bombastic moments that hook in you and seduce you from inside out.

The songs of Great Scorn sound ferocious and raw when Algras plays it fast. The depth and groove of music come, when songs are slower paced and impious chaos of black metal in this album finds its shape. From time to time you hear guitar solos that piercing throughout the dark horizons and landscapes of harsh and hellish music. Vocal shrieks tease you by its sound like ravens that craving for food. Vocal chants and death metal roars also enriched the music a lot. The album feels more completed if you decide to read lyrics along.

The record sounds very Scandinavian in any ways, same as the music but all those paths that Algras has chosen for his songs make very good album. The music is either cold, grim and arrangements are crafty which is another good reason that songs are very interesting to listen to.

I`m totally into this album.