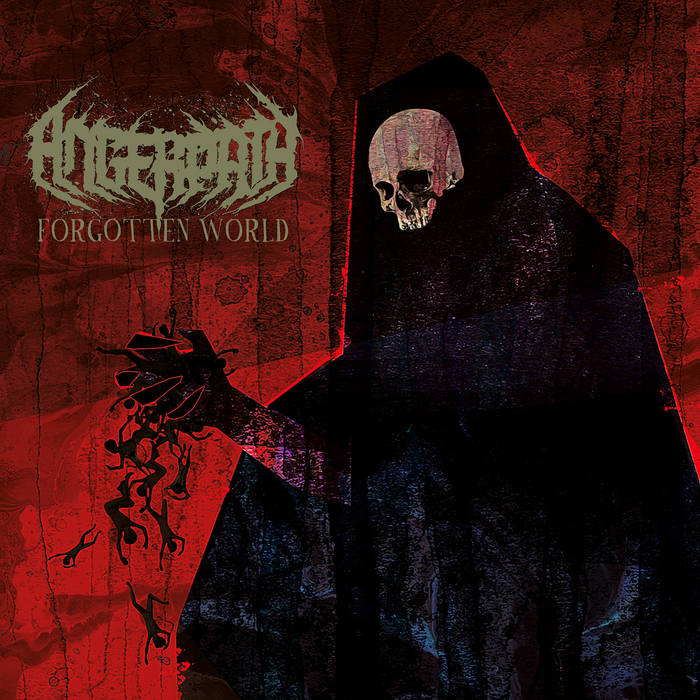 15 years ago, this very album was released by American label Epitomite Productions, but it was not an easily available album in Poland, due to the lack of distribution. Now Angerpath (Pol) decided to dust off this album with new drum mixes and better overall sound. You can enjoy their songs again or treat them as brand new if you have not heard it yet, with the 2022 release from Polish label Deformeathing Productions.

Forgotten World is a massive, brutal death metal with guitar break-downs, harmonies and heavily pressing vocals (Forbidden Voice For All). This opening track is so crushing that I do not question decision why this album has had to be reissued for real fans of death metal.
Angerpath  plays plenty of chunky riffs, but faster-played moments are present in the music also.  Kick drums sound massive (same as guitars and vocals), spacious, atmospheric solos or leads (Human Is Left With Nothing) are the band's trademark as I have learnt while I was connecting my senses to the music of  Angerpath.
Closed In A Small Thought is a heavy and slight journey towards progressive death metal. A bit strange but original guitar leads bring some atmosphere to their music. I really like the way this band riffs grind and crush.
A more dynamic and oppressive song is The Darkest Moment which has more real elements of progressive death metal  that I quite enjoy.
Hopes is a heavy, more atmospheric track (this part of the song is more interesting) that turns into standard death metal nut cracking (the less interesting part of this song). After a while, melodic ending kicks in and they returned  to the original ideas from the beginning of the song that sound pretty good again.
The title track is a mix of everything that is happening on the album, which are heavy guitar sounds with a slight dysrhythmia, a bit faster drumming and spacey, atmospheric guitars at times.
If you like bands like Sphere, Decapitated, Lost Soul, the song Every Little Word just confirm the very good condition of Polish death metal as it was and it is now. I recommend this refreshed album and the band Angerpath for fans that expect what is expected from death metal, but with satisfaction guaranteed that comes with it.
​Tracklist:

1 Forbidden Voice For All
2 Human Is Left With Nothing
3 Closed In A Small Thought
4 The Darkest Moment
5 Hopes
6 Forgotten World
7 Every Little Word
Review by Slawek Migacz
​Added: 19.05.2022
Deformeathing Productions Bandcamp/Angerpath