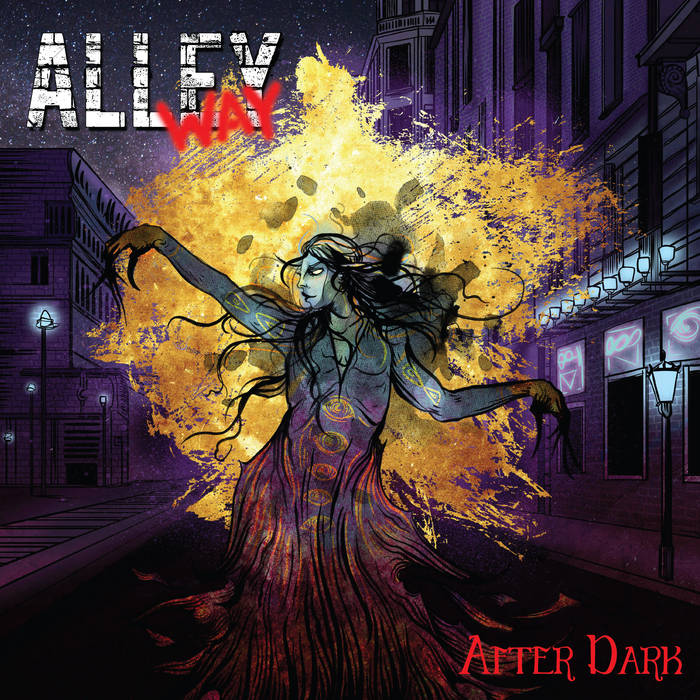 Alleyway is US crossover band and After Dark album contains of fast as torpedo-songs. Band delivers skull-crushing punk riffs, mixed with energetic metal (guitar solos surely has more aggressive metal edge). Majority of leading riffs are very in your face, punk oriented songs, powered up by metal sound. If you are into bands like The Exploited and Discharge, Alleyway will go your way with brutality. Songs of After Dark are not meant to be technically fluent, but instead, you get a musical spontaneity of raw punk and metal riffs that work just fine. It`s also where you get some feel of old school hard core therein the music. The album has some dirty rock`n`roll vibe, mainly thanks to nasty, alcohol-bugged vocals of their singer who sounds like Lemmy and Angelripper. Songs have plenty of shouted out loud choruses that eases to interact with the whole music of Alleyway.
Track Genesis In Rapture sounds like Motorhead heavy metal in a way, so the album conveys more than just one or two genres, which are all condensed accessibly in simpler tunes of the band that attacks you with splendour and sweet noise. Practically every song is an outburst of rage and pissed off vocals, although Alleyway has opened their musical horizons for melodies in music and added nicely plotted guitar harmonies in songs as well. Drumming is quite predictable in pace, however there are plenty of quick rolls on drums, in fast sequences that sound pretty cool. Album is pretty angry and full of energy, and in the end, I knew I would like the hell out of it from now on.

My best tracks today: Next Passenger-X, All The Screams, Sousson-Pannan, Her Own World...
​Tracklist:

1 Next Passenger-X
2 Live Wild Now
3 All The Screams
4 Sousson-Pannan
5 After Dark
6 Snake Eyes
7 Sorrento Nites
8 Her Own World
9 The Closer I Get
10 Genesis In Rapture
Review by Slawek Migacz
​Added: 16.03.2021
Sliptrick Records
​Home Page