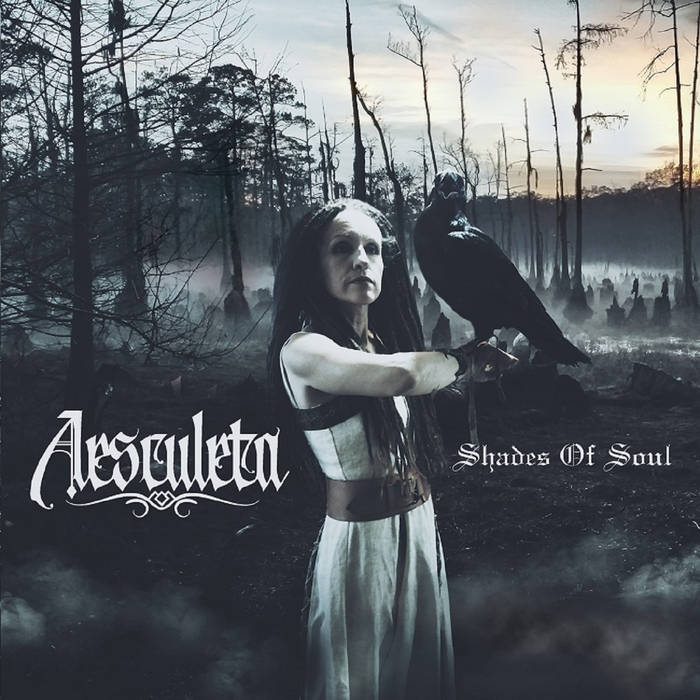 After just fine intro (Shades Of Soul), album starts off with short keyboards ala King Diamond from Conspiracy album. Not the same idea but you know, similar vibe. The song, in which it can be heard, is called The Nurse Of All We Know, where this Russian band plays monumental keyboards passages at slow pace, however the song has faster black metal fragments with blast beats and screeching vocals.Those few guitar melodies they have in the song sound pretty sorrow and showcase some music diversity in thinking of the band.
They prefer mid-tempos in their tracks, which is what is happening in next song When Sun Shall Die (Part I) that is having a somber keyboard passages that remind me 90`s doom and black metal bands (Cradle Of Filth, Dimmu Borgir), but I need to admit that Aesculeta`s expression of music is much simpler than in these mentioned bands and atmosphere of their music is more melancholic, which is alike in the band My Dying Bride.
Lost Highway is an interesting instrumental song, very dirge, dark and atmospheric. Drumming on the record is performed with a good sense of music, especially, I like it  in the song like this one.
When Sun Shall Die (Part II) is a combo of doom and black metal. Folky-some keyboards sound bombastic and kind of Slavic medieval (not Scandinavian vibes at all). There are short fragments when they play like typical black metal band with grimmer guitar riffs, which have been commonly used in the genre many times. The music in the track is based on simple guitar and keyboard passages that are hardly memorable , but having sort of bleakness to it - grey mix of black and doom metal sound.
In Deep Ground is longer, more ambience song with cinematic and mystery feel to it, as most keyboards ideas in their music.
Aesculeta has made Zombie, which is the cover song of Cranberries, only leading riffs are good in the track, and recognizable from original, because they decided to make it sounds 100% black metal.
Selene is not much different from other songs of the album. Slow and atmospheric doom metal meets black metal, but for me, it`s the least memorable song of the album.
Behind The Mirror is another instrumental piece from the band and again, all the duty was taken by keyboardist who play as if he was coming from past centuries that knew knights and magic spells, because ambience of the track is fantasy-like, but in fact, the concept of the album is dedicated to Twin Peak series, if it interests you, my dear readers...
​Tracklist: