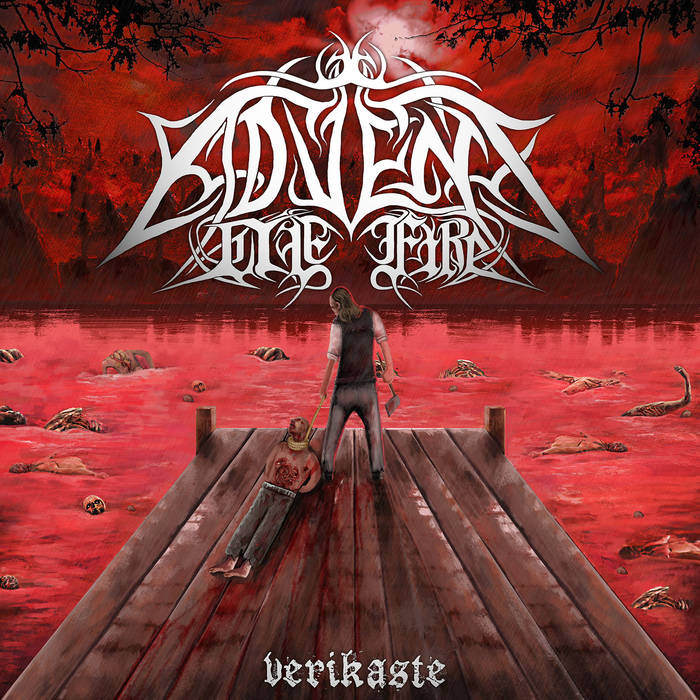 Album starts off with terrifying intro,  sort of  like a carnage or aftermath after war, and it  is followed by ritualistic vocals and tribal drums. At these very moment I thought that the album may be alike Greek Rotting Christ musically. How it turns out later on, it is not quite like that.
Kind of sloppy, aggressive black thrash riffing of the second track, leans toward death metal, but I have to admit that I like the main riffs of the song.  Vocalist on this album is a hell of a screamer and growler, lyrics are in their domestic language (Fin), so, it is comparable to what Impaled Nazarene sometimes does or did.
Third song is more death metal with  breakdowns but it also sounds lame death core. I noticed another very good riffs 2 minutes before the end of the song (hard to miss).
The album has plenty of motoric guitar work but music is often balanced between 2-3 metal styles...
Next song sounds like played by a band from South America, obscurely bad but good. Chaotic vocals  save the song if song writing is not always what it should be, which sometimes happens on the album.
Track 5 is a surprise, the band plays here some Goteborg style, melodic death metal with minor black metal influences. Singer does not necessarily need to give his best performance, because instrumentally it is a good song, better than last two.
A bit more dynamic, thrashy and death metal is track called Teuras. I actually prefer them playing melodic death metal, but as in this song, thrash guitar riffs bring more spice to the music.
They continue melo-agressive style in next song (7). Guitarist plays a nice, long solo, and there are few riffs after that, in the vein of Cannibal Corpse, which are rather nothing like the rest of the album.
A mishmash of thrash, death and black metal is number 8. It just shows how this album is sometimes - stylistically, all over the place.
And they left their heaviest song for last, which is one direction only - death metal with atmospheric ending.
Tracks 10 and 11 are only available on CD, one of them is cover of Black Sabbath - Heaven and Hell.
I do not think that production of the album was meant to be perfect.  Both music and sound  are harsh, old school.
​Tracklist: