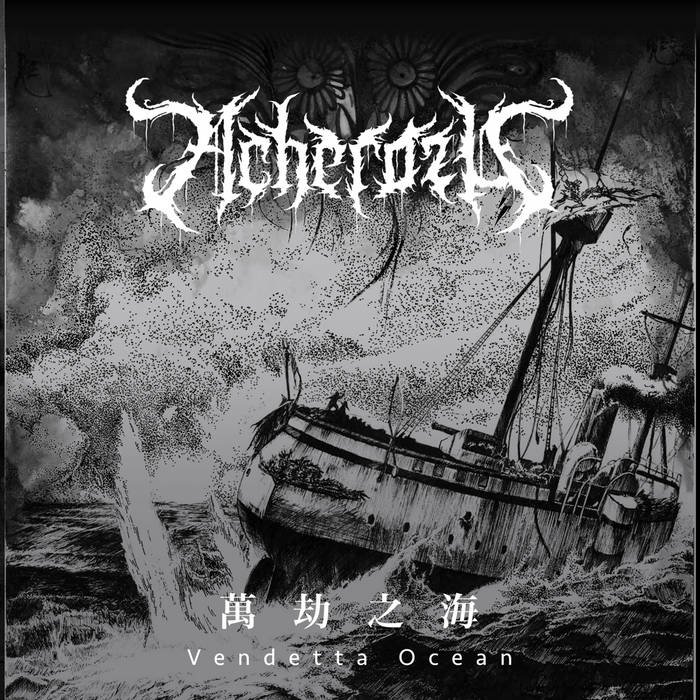 ​A band`s name Acherozu is a combination of words; Acheron from Greek mythology with ‘Zu’ from the euphony of Chinese word’‘卒’(aka Die or Funeral). Vendetta Ocean is a second album of the band and debut record for Austrian label Talheim Records.

I am in need to highlight a fact that album production is very prominent, sharp and sound is organic, very peculiar. All what remains is really, just to enjoy the songs of the band...

Vendetta Ocean is being advertised as black metal album and I can agree with this thesis to some degree. Perhaps the term "black metal" can be refered to the vocals that Acherozu performs in this style, although the band certainly does not sound like a typical black metal bands, much better actually. Songs like Dragon'Flag, Gashan are simpler played tracks, in the vein of Dark Throne/Venom, with a nicely polished sound, and these songs strike me more as classic black/thrash metal tracks, eventually, which does not mean that these are massively black metal songs. The band's Chinese background makes their music sound different from other bands. The album in general consists of melodic black thrash (Oceanic Sacrifice), and death metal (Barbaric Power) songs, some moderately aggressive (Demon Phantom) with hints to traditional black metal genre. Certainly, it`s not violent or brutal album. The atmosphere of songs and martial nature of lyrics are definitely aspects in which the band puts their efforts and where they find their identity in music that they play.
​
Vendetta Ocean sound very confident, darker in places when comes to songwriting. Band`s does not mean to impress when perform songs, it`s just a natural talent of Acherozu that makes music sounds impressively. Songs from 2 to 3 are exquisitely written by guitarists and bassist, drums sound brilliant and these killer tracks blend originally crafted melodies with some guitar harmonies and technical arrangements from the entire band. A song Jurgan is an acoustic guitar ballad, beautifully sung by female vocalist. It`s the composition where Chinese atmospheric vibe seems the strongest. Closing track Broken Waves is a melodic, groovy song with an epic, black/heavy metal character and few really good, catchy riffs which is just a great music journey.

I think it`s a decent black/thrash record that just sounds pretty unique. If I had heard Vendetta Ocean in 2019 it would be at least my honorable mention of that year.
Tracklist:

In 1894, due to the Donghak Peasant Revolution happened in Korean, the Japanese troops finally found the chance to invaded Korean. The battle of Feng Island and Yellow Sea were the first wave of Japanese attack and they successfully collapsed the Korean army’s resistance.Few months later,, the Japanese troops approached to the Chinese Liaodong Peninsula. After accepted the assistance request from the Korean Joseon Dynasty, the Qing Dynasty decided to military assistance Korean. For the hometown peace and national righteousness, a Shaman named Karmasi who lived in the Liaodong coastal decided to joined the Qing Army. He followed the General Iketanga and the Northern Naval Commander Ding Ruchang went to the frontline and went into the battles to wage against the Japanese army. The Liaodong Peninsula became the bloody battlefield littered with corpses, both sides had enormous sacrifices. Because of the corruption of Qing Government and its cowardice attitude, the Qing troops were always in an inferior position and without any backup. However, the fighting will of Qing troops were still as enigmatic as ever, they embraced the will to die to fight against Japanese troops.

The battle of the Yellow Sea was one of the most brutal battles during the war, both sides made the battlefield become a living hell. The battle had being fought so hard like beasts wearing the human flesh, barbaric and ferocious. With the battle went on, the Chinese navy was almost completely annihilated by the Japanese navy, Lin Yongsheng, Deng Shichang, Lin Lvzhong, Huang Jianxun and many other generals sacrificed. General Ding Ruchang lead the residual Chinese navy back to defend the Wei Hai fortress, however, they still could not stop the Japanese attack. In the following days, the base of Chinese navy Lv Shun had fallen. The war was over, Qing Dynasty was lost and hometown was fallen into Japanese hand, the struggle lost its meaning and the only thing left was the fear of the death and endless desperation. Kamasi was severely wounded but but he decided to stay at battle position to cover the main troops retreat, he knew he cannot survive so he offered his life sacrifices to the demon Eluri. The sacrifice made his soul and mind out of his flesh and blended into the ocean, it became the darkest Shamanistic curse to the Japanese troops. This was the final counterattack, so called “Broken Waves”.
Review by Slawek Migacz
​Added: 02.04.2020
Streaming/buy:
Talheim Records
Acheroz