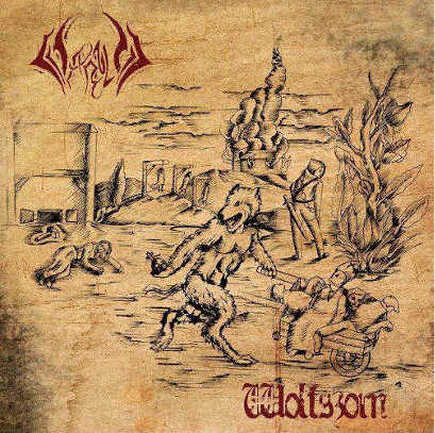 This is a raw, underground, diabolical black metal album that I remember it from old times, when Fenriz of DarkThrone was generally saying that the only true evil music is in the essence of black metal, so, he even hated his own album and death metal of that time. Wolfszorn (2015) was recorded in a studio, Varulv has captured black metal sound in its very essence, but to some degree, Wolfszorn also sounds like those second wave black metal releases from the 90`s, as if they were recorded somewhere in the attic, or in a garage. So, the music of Varulv got something of that creepy, insidious sensations, also, band members wear corpse painted faces which complete the visual and musical terror of Varulv ...
Vocals here sound black metal-typical, with impression that there is so much evil and hate to it, like in times when human being was cruelty to other human being for self-thinking (Witchunter). The band plays as a trio, but they laid down some layers in guitar tracks, like in their song Eternal Darkness, where those evil and melancholic guitar riffs could even trap a fire inside the ice. Mostly, it`s  mid-fast paced black metal album, there is nothing too complicated about the songs of Wolfszorn, which significantly is a pure black metal album. There are songs where band play aggressively (Eternal Darkness, Bastards Of Black Metal ). Some harmonized guitar shreds and groove can be heard in Wolfszorn. Heavier, more rhythmic, and with guitar break downs song is Witchunter or, there is a slower, groovy track Die Elende Knechtschaft, having its faster moments too. Varulv sounds darker and darker with time (Galgenblueten), but in the song Pesthauch, some grim guitar melodies try to break through it, however, the drummer plays here mercilessly and very fast, so he is not letting melodies fully shine throughout the whole song .

The guitar production here has a crunchy and rough black metal sound - traced from Scandinavian black metal scene. Albums like Wolfszorn mekes me feel-less, like I was the undead with barely any signs of life, - I surely do not say it`s bad! Only classical music can conquer black metal when I think about negative and very dark sensations that can be created in music, as it is in this album too. I give Wolfszorn 2.5 out of 5 points.
​Tracklist: