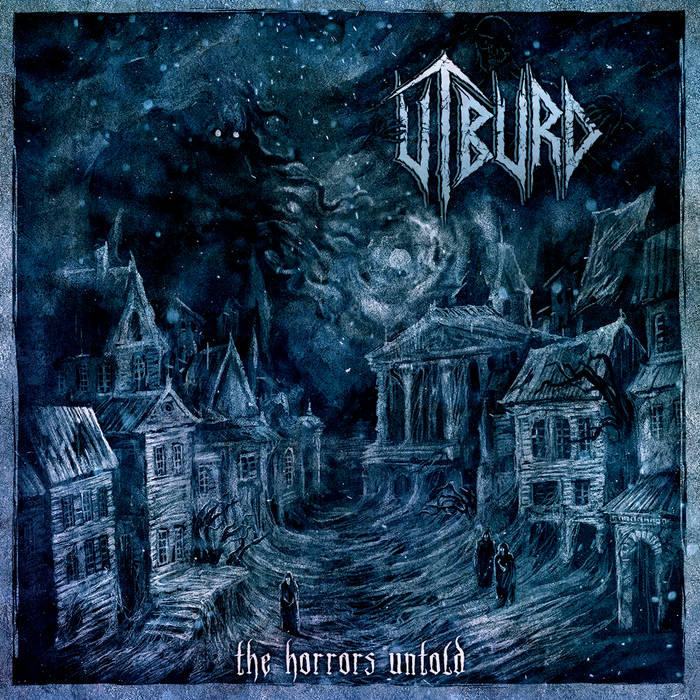 Sophomore album from Russian guy with a name Tuor, who is a an enthusiast of Lovecraft`s literature. He is giving tribute to the master of horror from Providence by lyrics and by music that he creates on all instruments.

I am fan of Lovecraft`s fictional world too and I think that front cover is pretty close to his works but music?, not necessarily...

It`s not orthodox, fast or radical music but it`s black and doom metal album which means that it has to be a bit extreme. Music tendency here is to get the atmosphere and depth of horror in general, through deep and hard guitar passages which additionally Tuor supports by adding some keyboard like effects. It`s difficult to completely oppose the atmosphere from this album, when few times music made me feel isolated like I was out of this world and I think this may come from minor post black metal influences that the album has. I have to give to Utburd that some mysteries of music have inspired my imagination somehow... I'm thinking about first half of the album that I in my opinion has better music than a second half...

I'm not overly excited about all the music; maybe I'm not even thrilled at all.  I like get get goose bumps in general but I do not get it from this album. All emotions and thrills that come from reading Lovercaft books are obvious for me, but it`s hard to get the same vibe from The Horrors Untold album. I expected that in the music of this band I would find a stronger literary-musical connection, but Utburd makes the difficult task and horror of Lovecraft's literature as I know, wins against the music of this Russian metal project. In my opinion the atmosphere of this album is not much alike horrors that Lovecraft wrote in his books but on the other hand, it can be said that it is better, which is simply controversial...

The production of the album is imperfect –mixes, mastering. Tuor`s music performance is average and some guitars and drumming he has played, sound dreadful but,  it`s not like it`s bad, OK?. Vocals do not give me bad impression but not too good either. Most of the effects enriched the sound and dark ambiences of songs but music in general lacks of fluency. Music performance showcases some struggle of Tuor who is not yet capable to play on all instruments at the same level. Do not get too excited about this album, unless you have to because it`s inspired by Lovecraft stuff and so on... My opinion about album is on: yes and no – I am just not convinced.

1 Rise Of Dagon
2 The Mystery Of Joseph Karven
3 Death From Mount Tempest
4 Pikman's Triumph
5 The Horror Untold
6 He, Who Paint In Red
7 Waiting For Death Is Worse
Bonus Track: