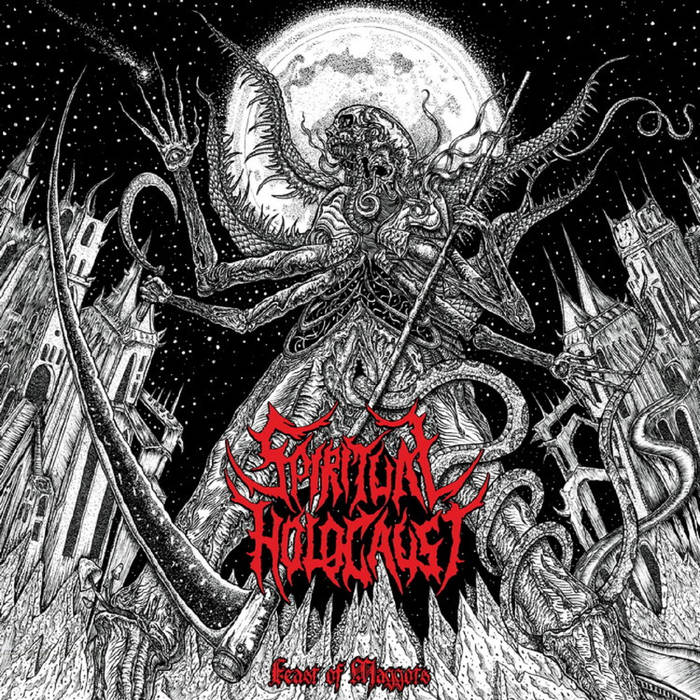 First album from Spiritual Holocaust is an old school death metal from Finland.  A bit throwback to distant and glorious times of Scandinavian sound. This record was recorded in many places in Finland from 2014 until 2017, so not in Sunlight studio....  However, the band takes a course to this type of sound that just has more careless and dirty production to it.  I am a big fan of Swedish sounding albums which reminds me of how good death metal music is with such studio production. Following the fact, the band like Spiritual Holocaust has a bigger chance to success in my personal ranking of good bands. I have to warn you however that Feast of Maggots does not sound as good as Entombed or Carnage for sure. Their death metal songs have pure death metal vibe that I certainly like and never get tired of, but production wise, they are not that close to Left Hand Path or Like An Everflowing Stream releases. Musically - on the other hand, the band is much more like them.

Feast Of Maggots has heavy and massively death metal riffs that reminds me of Dismember pretty much. The guitar rhythmic and shreds that go along are pushing them on, a bit further, from being too much one-dimensional, in terms of music direction. To my convenience, they try every track not being composed the same way, which is fine diversity to their very traditional, old school death metal approach. There are few moments where they put some melodies in songs but the album has a darker edge to music and lyrics overall. They play faster few times, even with blast beats but those tempos are reduced to necessary minimum which is good, because it`s not this type of band that would play very fast in long distance and do it better than other bands already do. Playing slow and/or in medium pace is much more their thing to do, which sounds heavier, and I prefer it much more.

The vocals frequencies are growl leveled and performed in very traditional way, same as music itself. Actually it`s what I would expect from them and good death metal band as they are. They reached out solid vocal depths and brutality which they give it to you throughout the album, without any soft spots.

Foremost, it`s really fucking brutal piece of obscure death metal that Spiritual Holocaust emphasizes by music in this album.  They try to find its own, natural music flow, but without even attempting to sound and play very original. I like this way of thinking - do what you do best and if you are honest to yourself, people shall appreciate it. If not, they can always fuck off.

I am cruelly happy to recommend another good death metal album for you, which for me is Feast of Maggots by the band Spiritual Holocaust from Finland.