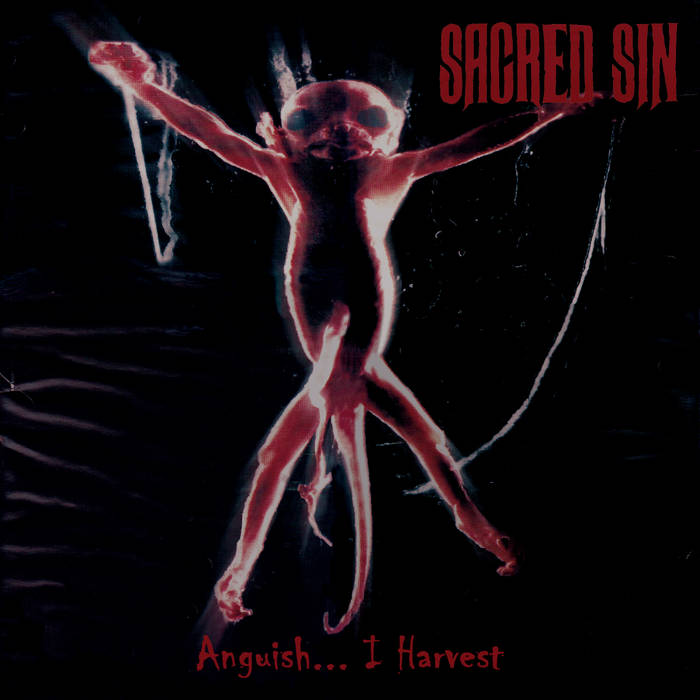 Sacred Sin is a long time going band from Portugal - first demo released in the early 90`s. I`ve never actually heard any music of Sacred Sin, however I believe that I could hear the band`s name several times. Strange thing about Portuguese scene is that it`s hard for me to recall at least 5 bands that I know by name. The ones I do know are  Moonspell and Dementia 13, assuming that I have no recollection about any other bands .

Anguish... I Harvest was originally released in 1999. I am reviewing recent, re-mastered album edition that includes band`s reh-demo from 1997 which actually has bad, stereo-mono kind of  sound, so, I better skip this part.

The interesting part is that album has some good, heavy/thrash metal songs like - The Shinning Trapezoid / Seal Of Nine and better one which is Hope (Still Searching). Quite often, you can hear thick, slightly intricate, speedy guitar shreds with few melodic moments - songs Fire Throne, and killer track 13th Moon (!) that could have been written by Jeff Waters. There is one progressive track called Astral that together with 13th Moon are my two favorite tracks of the album.
Back in 90`s, I remember there was a war about whether keyboards should belong to metal or not - for many people actually, it just did not at all.. Of course, sometimes sooner or later, the idea of using keyboards sound has had to breakthrough to imagination of wider metal community. It happened that Sacred Sin used this instrument when they were making this album. Keyboards are not on the first plan in songs of the band, all arrangements are little more a background for metal-skeleton sound of the band, dominated by guitars, drums and dark sounding vocals. Keyboards sound pretty delicate, and any atmospherics are delivered into music quite moderately, without making any booms for music itself.
Beside growling vocals, mixed with screams, words from a singer are manageable to understand by ear. For me, it`s surely not a strict death metal album at all. Songs of Anguish... I Harvest gravitate between aggressive thrash metal and melo-atmospheric thrash that just has a slightly brutal moments, from time to time. Italian band Sadist was about that in their songs, in sometimes dull, 90`era for metal but Sacred Sin has more straight, thrash metal songs (guitar work) with little mixture of melodic death metal in this album.
Anguish... I Harvest clearly showcased Sacred Sin as the band that has been developing their sound and collective musicianship at that time and, it`s good, diverse album, I just do not know if it`s their best they have done...
Tracklist: