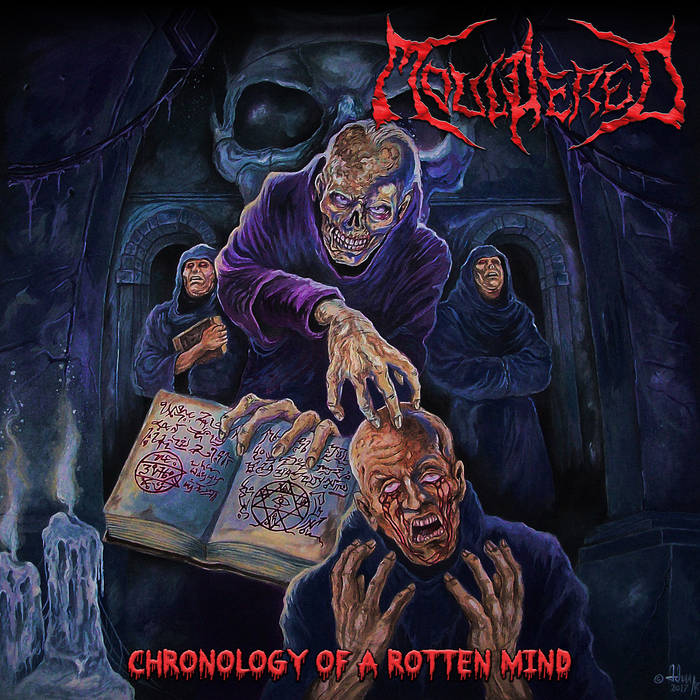 During last year, I heard many 20 minutes long materials as this one that  gave me fun and satisfaction from listening to them. I think Chronology Of A Rotten Mind is kind of the release where there is enough good music to fulfill my needs but if it was 10-15 minutes longer material, things could go differently and maybe it would not be a good album anymore. But in the end, as it is now - it is.

Mouldered is a brutal death metal band from Colombia which sounds a bit like bands from the 90`s (Baphomet-US, Miasma). The production of the album is neither polished nor too modern. I think Mouldered came to the essence of DM with the sound of this album, and they stop at nothing to deliver as much brutality and abhorrence (Intro in I am Legion) as possible.

The most of the songs have extremely heavy sounding guitars. Vocals are very low tuned growls that give death metal what it really needs to earn its well deserved name.  I like when they do play tracks in mid-tempos, then, music speaks more to me in the form of sounds that suit me better, which is what the band serves on this album quite often. The songs are in style of both - brutal and slammy death metal (tracks 2,3,4,6...) in which Mouldered seems quite comfortable as a band. The album has many moments where the sound-wall is crushing like a beast and they mix it with fast death metal, which is where you can hear little guitar tapping a-la Cannibal Corpse at some points. They also play some fine blast beats to speed up process of head-banging with the flow of the music, which takes only 20 minutes of good-music- time to do so. Mouldered is balancing different paces for their songs which is something that they do very well. I also think that technical bass variations (usually more suitable for bands like Cryptopsy) that they occasionally melt into songs are fresh breath of quality for the songs.
It`s very death metal album and there is nothing more to it. The strength of the album are very interesting ideas that make this album, a brutal epitome of music. And of course, as brutal as this album comes first, nothing melodic off this record can harm your fan`s extreme ego.

I recommend Chronology Of A Rotten Mind for people who have no mercy for themselves but they actually would like the music for what it is, which for this release, is a death metal decency.