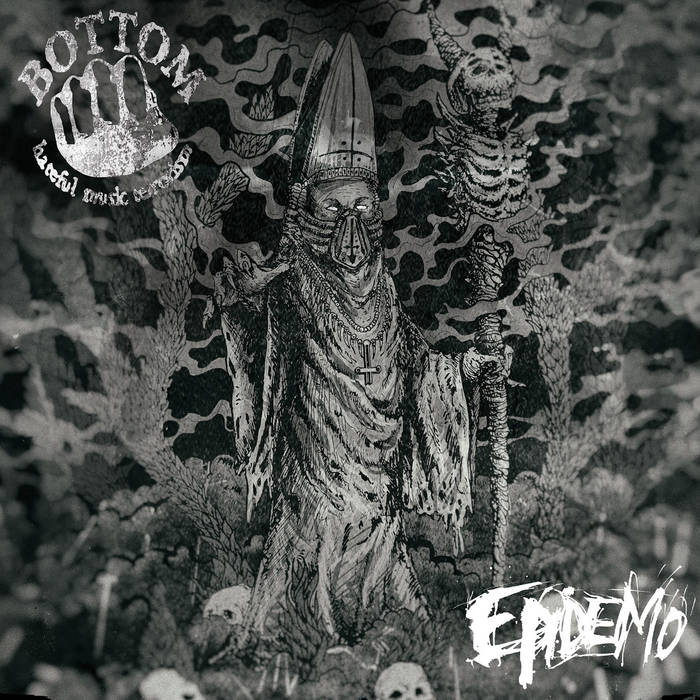 Bottom is a Polish grind core band with members of Psychoneurosis (long time running Polish legends of extreme music since 1991), Nuclear Vomit, death metal Infatuation Of Death (RIP) among few others. I am keen to music of Bottom since 2017 when they released their album Psychofilia for Deformeathing Prods. Epidemo is 8 tracks mini album for the same label and it`s been excellent choice to remind people about the band because music on the CD is smashing to small pieces other records of this type.

Now, I`ll write for you why I think that this mini album is so exciting.
They figured absolutely atomic sound to this release. It`s one of the best grind core production I have heard from Poland and it`s pure pleasure to hear it. Because the sound is so murderous and precise, those one,two or around three minutes long songs will knock you down instantly.  It`s only 15 minutes of music but if you need short and violent grind core punk songs then you gonna like. It`s kind of quick excitement like when you shatter a glass bottle against the wall.
Bottom has 2 vocalists who sing completely different ways but no other than extreme which is pretty awesome. The song are rather done simply but music varies from incredible heavy moments to the limits of speed which anyway - it`s a strength of Epidemo. Few times, you can hear some groovy guitars among brutality of music, so yeah, I think it`s kind of intelligent record because I understand and enjoy every part of it.

I won`t tell you anything specific about lyrics because it`s about reality that affect us and it`s all SHIT that people hate.

Grab this album to your collection; Music wise, Bottom is as good band as Napalm Death, Straight Hate or Fredag de 13 so, this record is about good music and extreme vocals.